Renuka Shankar is the founder & CEO and chairman of the board of averQ. She is in charge of the product strategy of averQ with a vision towards delivering high-value transparency solutions to financial institutions to manage their financial and operational risk. She strives to intently listen and empathize with customer needs, and enjoys building teams to deliver innovative solutions.

She was previously the cofounder & Vice President of Engineering at Certus Software Inc., where she delivered market-leading GRC solutions for Fortune 1000 companies. Prior to Certus, she was part of the early team at Rightworks through its $1B valuation and subsequent merger with i2 Inc. At Rightworks she led product development, technical partnerships, and customer services for both B2B marketplaces and enterprise clients. Her early career was in applied research in Human Computer Interactions at NASA Ames Center and technology transfer programs to leading aerospace companies.

She has M.S. in Electrical Engineering from Vanderbilt University and B.E. from Anna University, India. 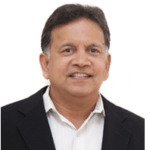 Sridar Iyengar has served on the board of averQ since 2008. He is the founder of The Sounding Board, an initiative providing growth-ready Indian companies access to advisors at the highest level. He was previously with KPMG in the UK, India, and US; holding senior positions in various disciplines. He was on the founding team of KPMG in India and the Chairman and CEO of KPMG’s India operations from 1997-2000.

Since his retirement from KPMG, he divides his time between his corporate Board/Advisory commitments and his involvement with social development and civil society issues in India. He serves on the boards of many Indian and foreign companies including: Dr. Reddy Laboratories, The Murugappa Group, Rediff.com, Mahindra Holidays, and on the Advisory Board of Janaagraha. Additionally, he serves on the boards of nonprofits such as the American India Foundation, where he chairs the AIF Clinton Fellowship for Service in India. He was previously on the Boards of Infosys and ICICI Bank. He was a founding charter member of TiE (The Indus Entrepreneurs) and a president of its Global organization as well as the Silicon Valley and Mumbai chapters.

Sridar graduated with B.Com (Hons) from the University of Calcutta and is a Fellow of the Institute of Chartered Accountants in England and Wales.